Around 1990 I bought a table saw and a wood lathe from an elderly gentleman, and was given 5 boxes of planes as an "extra". I began researching these planes after receiving advice from the member’s of the HTPAA on the display stand at the "Working with Wood Show" in Melbourne soon after. Amongst those planes, I found I had been given a Chaplin’s original patent block plane. As well as other American patented planes by:- The Metallic Plane co, Shelton, and Stanley from the late 1800’s and early 1900’s.
Gun makers after the American Civil war seem to have turned their attention to the hand tool business, and their inventiveness is reflected in the huge number and variety of patented designs of hand planes and their adjustments. I had studied Mechanical Engineering at RMIT in the 1970’s and was fascinated by the variety of adjusting mechanisms on these planes. And in particular I liked the Chaplin’s early patent planes. They had elegant solutions to design and engineering problems created by the protection of patents already held by other plane makers. I’ve been a goldsmith and jeweller since 1976 and a student of design in that field for many years. The Chaplin’s planes with their flowing lines, and sensuous curves stand out from the rest of the patented hand planes of the era. They are more reminiscent of the decoration seen on planes from Great Britain made about the same time. The lever cap with its large round screw, curves and pair of arms around the frog plate have been likened to the female form embracing the blade and holding it to the plane, I agree with that...but then some say I have an obsession with both the female form, and hand planes…both absolutely true!

The challenge of the hunt, the difficulty…. and the rewards of finding a treasureI’d collected Chaplin’s early patent planes for about 6 years when a friend called me from Camberwell market early one Sunday morning. He’d found a small block plane like the ones I collect. I misunderstood his description and told him it probably wasn’t one. Luckily he bought it, and when I saw it the following Monday was very surprised to see  #0 block plane, the smallest one from the earliest series. I knew it was a rare item because there were no photos of that particular size plane in either of Roger Smith’s volumes on Patented Planes…only a reproduction of an advertisement from John P Lovell Arms Co Boston, Mass. I emailed Roger Smith and he confirmed it was indeed a very rare item. As far as I know, no others have been found, and there are none I know of in any other tool collection. 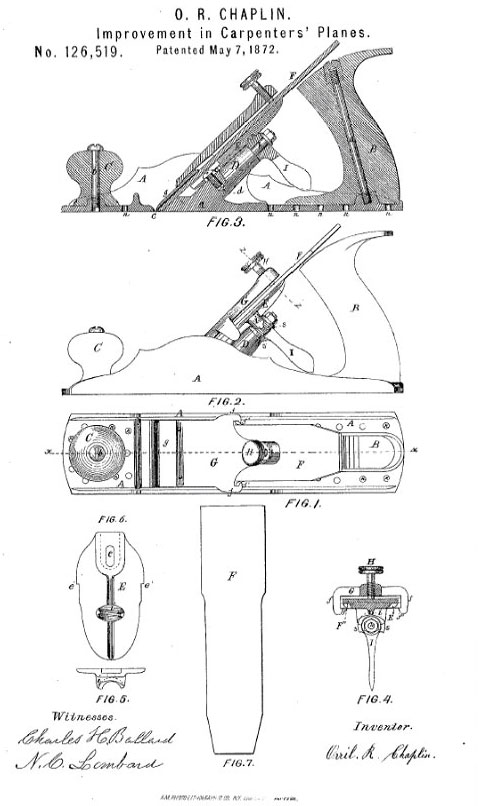 How the frog / lever cap works

There is no lateral blade adjustment on the original patent planes.

The blade depth adjustment is obtained by an ingenious adaptation of the worm and worm-wheel gear system, seen on reduction gearboxes and winches. There is a paddle attached to the section of a worm gear, and a small section of the worm wheel is incorporated into the bottom of the frog plate, so when the paddle is moved from side to side the frog plate rises and falls.

The frog plate is held in place somewhat loosely by one round head screw at its base, and the mesh of the gears at the top. The lever cap is a two-piece system, the upper one in cast iron and the lower one made in hard steel forming a chip breaker. The two arms on the lever engage with corresponding steps behind the lever plate. When the blade is placed between them, and the screw on the lever tightened, the blade forms a bridge between the planes base, at the bottom, and the meshed gears at the top. The cast top half of the lever bears down on the centre of the steel plate, which can pivot slightly, and so at its top and bottom bear down on the blade positioned close to the edge of the blade to perform the chip breaker function.

Blades will fall out the bottom of the original patent planes when the lever cap screw is loosened, so care is needed when handling them.

One of the most obvious features is the Hard Rubber handle. (cast iron handle and knob on the earliest models)

Not Gutta percha, or Bakelite. They are Vulcanized hard rubber (Ebonite), invented by Charles Goodyear c1844. (Prolonged vulcanising of rubber with the addition of sulphur.)

Wooden body planes were only made in the Original Patent design.

The cutting end of the blade is wider than the top where it must fit between the lugs on the lever cap.

The lever caps and steel back irons riveted to them have assembly numbers.

An amount of hand fitting which is probably one of the reasons for their relatively short production life.

Parts are a bit less likely to be interchangeable than other makers.

Lower standards of quality compared to other contemporary makers, Steers, Bailey, Stanley, and The Metallic Plane Company…(but they were responsible for the horror three-lever adjuster)

Major difference is the addition of a lateral blade adjuster to the improved patent planes, interestingly located forward of the blade, a different depth adjustment from the original patent and a parallel sided blade.

Replacing the screw and lever depth adjuster with a rocking cam.

List of persons involved in designing and making the Chaplin’s Patent planes.

Iver Johnson: Casting and manufacturing the planes (and firearms).

Maschil D. Converse, Superintendent of the Tower and Lyon Company in 1904.

Cast Iron hollow handle with cross bar, dovetailed block on base, and lips on handle to engage the base.

Dovetail and pair of lugs to hold wooden handle.

Corrugations below and above base, throat adjuster, Vulcanised India Rubber handle – chequered, fitted into a collar dovetailed to the base.

Back iron for wooden based planes.

Sprung steel back iron contained under a flanged saddle through a hole in the blade.

Lateral lever with excentric under thumbscrew on lever cap.

Any attempt to “Type Study” the Original Patent Chaplin planes is challenging. There is clear evidence in dated magazine advertisements of overlapping sales of different features that were added as Patents were obtained. Some features of these patents may have been incorporated before, and some after the actual patent dates. However, a broad outline can be seen, and the developments which were incorporated when patents were obtained. Other problems are the many anomalies and variations, and also planes not listed in advertisements or catalogues.

Improved patent planes made from about 1900 to 1914. (I find them a bit light weight…) one of the reasons I have less interest in the “Improved Patent Planes”

Luckily we only have a short period to deal with…not 150 years, as is the case with Stanley.

Wooden body planes were only made in the Original Patent design.

# 0, # 1/2 and # 1 planes. These have solid frog plates and solid backs on the lever caps. Unmarked blades. Possibly made by Charles Ballard, Worchester, Mass.

Type 2 – 1876 – 1890 Black japanned. Iron handle and knob. Smooth bottom only. These have the extra scallops on the larger planes #6 - #11. The same solid lever and frog plate as type 1. The bevel up style block planes replaced the sizes under #2. On the block planes the adjustment paddle is squarer in form than the later teardrop shape, and the knob has coarse knurling. Unmarked blades.

Type 3, (Oct 1887 Tower and Lyon advert "Carpentry and Building"), Smooth base and corrugated base (corrugations on the top of the base), i.e. the 12** series. Adjustable throat option on some planes, frog plate now hollowed out shape to reduce friction on the blade, and the lever cap also shaped on the back with a central rib. Optional iron or wooden handle. Tower and Lyon on blades. On the block planes the adjustment paddle is teardrop shape, and the knob has fine knurling.

Some comments on the sizes and rarity.

The original numbering system on the red japanned planes was :- the block planes #0, #1/2, #1 then bench planes #2 through to  #11 skipping #9 ( maybe to save confusion with #6) This was continued through the next type with iron handles and knobs, and some of the early hard rubber handled planes. Then the system for the bench planes changed to the 3 and 4 digit system with the last two digits giving the size, eg *03, and the prefix either a 2 for smooth bottom or a 12 for a corrugated base. The adjustable throat was signified by a repeat of the size number in place of the 0. eg. non-adjustable smooth 205 or corrugated 1205, and with the adjustable throat 255 and 1255.

The smaller sizes are VERY RARE, the so called Model Maker’s block planes (#0, #1/2, #1). These have bevel down blades, with a bedding angle of 45 deg. like a bench plane for the #0 and #1/2 and a lower angle for the #1, but later block plane types are bevel-up, giving them a lower profile.

Some sizes are much more rare than others. Small sizes obviously, #2 and to a lesser extent the  #3, but a little surprisingly the  #4 - 9 inches long with a 1 ¾ inch blade is one I’ve never seen.  The #6 - 12 inches long, which is almost equivalent to the Stanley 5 ¼ but the blade is ¼ inch wider at 2 inches is only occasionally seen. The wooden body transitional style planes aren’t common.

Note: The 1898 Orr & Lockett Hardware Co. Chicago show the model numbers for the seldom seen wide block planes with 2 inch blades, with what must be a misprint of the plane and blade dimensions. It is printed in error with the same dimensions as those for the #20 and #30.

Advertisement for Tower and Lyon, New York, in Carpentry and Building, October, 1887.

Note: There is also a Chaplin’s Patent shoot board and plane.  Another collector found 10 different variations before he discovered a duplicate.